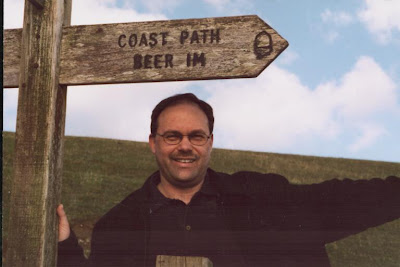 As the News International phone hacking scandal unfolds and layers of police corruption are uncovered, I am reminded of other stories of the police coming under public scrutiny this year; the sensational tale of Karl Chapman who was taken to a brothel by police and took heroin in their company in exchange for his cooperation as a key witness in a murder trial; a story about the Cardiff Three who were wrongly convicted for the murder of Lynette White in 1990. Since the real murderer’s confession, more truth has surfaced and eight South Wales police officers are currently on trial for fabricating evidence and conspiring to pervert the course of justice.

Although justice is welcomed by those who have been miscarried by it, the truth often surfaces far too late after the fact; for victims of the phone hacking scandal such as the Dowler family, their grief is further aggravated and their ordeal prolonged; for the Cardiff Three, they had already spent two years in prison and when they were released, suspicion and stigma still hung over them until Gafoor’s confession in 2003. It took another eight years until the police involved were finally asked to account for their actions.

Glyn Razzell has served over 7 years of a life sentence and  is still fighting to get access to all the evidence that had him put away. He wonders if the truth about his case will ever come to light. On 14 November 2003 he was wrongfully convicted of the murder of his estranged wife, Linda Razzell. Linda disappeared on the way to her workplace, Swindon College, on the morning of 19th March 2002 but her body was never found. However, blood was found in the boot of the Renault Laguna that Glyn had in his possession that day. DNA from the blood was matched to Linda’s. Pretty incriminating evidence you would have thought, unless you take the time to look into the case and all the evidence, and particularly the way the police behaved during the investigation.

In Britain police record about 1,000 missing persons every day, yet as soon as Linda Razzell was reported missing, police treated it as a murder investigation and put over 40 Officers on the case. It was a hasty presumption as there were subsequent sightings of Linda. Most notably, a witness who had known Linda for 10 years, said she saw Linda driving a silver ford fiesta the day after her disappearance. The friend had waved to her, and said that Linda seemed cross to have been seen. The police did their best to discredit the witness because this didn’t fit in with their theory that Glyn had abducted and killed his wife.


Glyn said he was taking a walk at the alleged time of the abduction so police seized Glyn’s shoes, cleaned them, and said they weren’t muddy enough to have been worn on a walk. Glyn urged the police to look at CCTV footage from a police station and from Swindon’s Ericcson offices which would have captured pictures of him on his walk but astonishingly, they made no attempt to retrieve the footage until six months later, by which time it had been “lost” or “recorded over.”
The police searched Glyn’s home and took out the pipes in the kitchen. Glyn remained cooperative, trusting that he would soon be eliminated and his missing wife would be found. However, the conversations he had with police during that time were later used against him. Police even claimed that the mattress protector from a bedroom was missing and had been used to wrap a body when in fact, the police themselves had seized it and listed it incorrectly.

There was something else missing too; a motive. Glyn had a career in finance and is very on the ball about money and insurance matters; he knew that he would not benefit financially from Linda’s death. It wasn’t a crime of passion either because Glyn and Linda had been separated since August 2000 and had little to do with each other. The marriage had broken down principally because of Linda’s infidelity with builders who were working on their extension in 1998 and the consequences that stemmed from it, including Glyn starting a new relationship in October 1999. Linda initiated divorce in May 2000 but was getting increasingly bitter about Glyn’s relationship with an attractive, younger woman. This could be a motive for Linda to want to ruin his life. She had a long history of mental illness and had also made false accusations of domestic violence against Glyn during the divorce proceedings. Glyn was acquitted on all counts.


Mysteriously, Linda had marked March 19th with a ‘?’ on the calendar in her home but no one knew why. Internet cookies on Linda’s computer showed that she had been looking at cheap flight websites in the previous weeks and a shopping list written by Linda on March 18th contained the words ‘collect travel tickets.’ Linda had two phones, one for work and one she used exclusively for contact with her children. On March 19th Linda left that phone at home and said, ‘goodbye’ to her children rather than the usual ‘see you at five.’ She spoke fluent French, loved visits to Paris.  Linda gave conversational french lessons to a man going to work in Burundi and the address of the Burundi Ambassador in Paris was found on a jotter in Linda's home.

So, one should rightly ask, if she did stage her own disappearance, how did her blood end up in the boot of the Laguna?  It is as much of a mystery to Glyn. Yet, in the eyes of the prosecution, he is denying Linda a proper burial by not disclosing the location of the body, which paints him in an even worse light. Glyn maintains his innocence and says he didn’t even know about Linda’s routine. How can he have predicted her movements on the morning of March 19th and known where to be to abduct her?

Others saw her that morning; a witness saw Linda’s car in a lay by on the road she used to travel to work each morning at around 9.00, before she parked her car in the usual spot in Alvescott Road. Linda’s boyfriend’s car was parked next to hers, and another witness saw her boyfriend at 9.30am, near to where Linda parked her car for work.

Linda’s romance with the builder had fizzled out but she was now seeing Greg Worrall, her best friend’s husband. Acquaintances say she didn’t see it lasting long term. The previous day, Greg and Linda had visited three banks together and CCTV shows this. This was ignored by police as well. Glyn’s defence team claim Greg Worrall had lied to police about his movements on the day Linda disappeared; mobile phone analysis proves this. 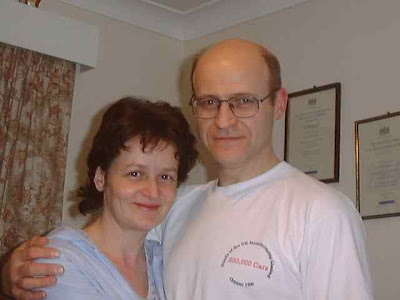 Linda with her boyfrined, Greg Worrall.

Worrall had been questioned by police but all focus shifted to Glyn once the Laguna was examined for the fourth time and the blood was found. The car was initially searched by detectives and then examined again by SOCOs (Scene of the Crime Officers), and then once more for 5 hours where swabs and tapings were taken. Nothing was found; not a nail, not a hair, not a single fibre connecting the car to Linda, and no signs of recent cleaning. The car was then returned to its owner, Glyn’s friend, who cleaned it thoroughly because it was covered in forensic chemicals. However, the Laguna was seized again on the 28th March. The forensic officers used luminol this time and said they found spots of Linda’s blood.

This evidence was presented in court by the prosecution using sketches and photographs along with a verbal statement from a forensic expert. It made the desired impact on the jury and judge. Glyn was going down but I doubt the jury were aware of the complex yet glaring inconsistencies in the forensic evidence.

Police claim no photos were taken during the first two examinations, which seems highly unlikely for a high profile, expensive murder investigation which was given the codename; ‘Operation Docker,’ from the outset. Luminol will show up all traces of things containing iron and/or copper like blood, soil, cleaning chemicals, plant material, lawn clippings etc. The first photos taken of the Laguna were during the third examination and show chalk marks highlighting where the luminol has reacted with a mineral. Many of these later turned out not to be blood. When blood was eventually found, a controversial low count DNA analysis method showed a partial match to Linda’s DNA. Later forensic officers were interviewed and said they found heavy staining in the Laguna, visible to the naked eye. How could these stains have been missed in the first two examinations?

The prosecution only had to disclose the evidence they used in court so there are hundreds of pages of forensic documents about the Laguna that Glyn and his supporters have never seen. Glyn believes these could contain the evidence to overturn his conviction, yet the police refuse to release them. Why? Is it because they might reveal that the blood was planted to incriminate Glyn? 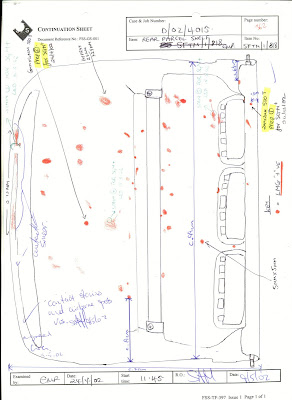 Note the page number ‘362’ in the top corner. None of the other hundreds of pages of forensic evidence from the FSS were disclosed so will count as ‘new evidence’ for Glyn's appeal if they can be obtained. The blood splatters do not seem to match up with the luminol patches in the corresponding photographs.

Glyn is currently working on his appeal but he needs new evidence about the blood for the CCRC to reconsider his case. Glyn hopes his solicitors will obtain a court order soon to release the documents.

Glyn tries to maintain positive and proactive whilst he’s inside. He hopes Linda is ok wherever she is. Glyn's sister, Vicky George has supported him throughout his ordeal and helps to keep him informed of what’s going on in the outside world as there is no Internet access or newspapers in prison. He’s not demanding a world-wide hunt for Linda or a national front page expose, just access to some documents that could allow a belated and partial justice for himself.  There's always the worry that the forensic pages are ‘lost’ like the CCTV footage mentioned earlier, and that those involved in Operation Docker will do their utmost to keep this information secret. I hope in the near future, Glyn will be in the news again for the right reasons, because his conviction is overturned or because his estranged wife is found.

This morning I received this email from Vicky George, Glyn's Sister. It was sent to me and others who have previously written about Glyn's case:

"I'm writing to let you know about a recent development in Glyn's case and to ask for your help.
Glyn has had his access to a laptop computer withdrawn because he was using it to write to a journalist about his case.  This is an unlawful act by the prison because he had a court order that the prison service provide him with a laptop for his CCRC application case work.  Also, Prison Service Instruction 37/2010 Para 2.1 states that  'prisioners do not need permission from the governor to read or receive letters from the media', yet staff at HMP Kingston are ignoring this directive.
As you may know Glyn's case involves over 10,000 items of evidence and much of this, together with his own notes, is stored on the laptop.  If he loses access to this material his CCRC application could be set back years or lost completely.  He is also concerned that the authorities could copy his legally privileged material.
Is there anything you can do to highlight his plight in the media or to bring pressure to bear on the governor of HMP Kingston to return Glyn's computer and case files and to allow his access to the media?
Thank you for your time
Kind regards
Vicky
Vicky George
Glyn Razzell's sister

Other media about Glyn Razzell.