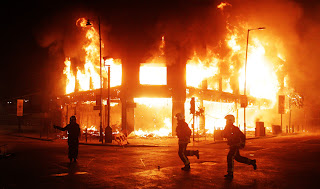 Writing about the British riots makes me very, very uncomfortable.

I’ll tell you why, using a quote from award winning blogger, Laurie Penny:
“Most of the people who will be writing, speaking and pontificating about the disorder this weekend have absolutely no idea what it is like to grow up in a community where there are no jobs, no space to live or move, and the police are on the streets stopping-and-searching you as you come home from school.”
I admit, I am one of those people. I also have no idea what it’s like to jump out of a burning building, be too terrified to leave my house, find my livelihood destroyed, be mugged in the street whilst bleeding, or lose a beloved son.
I have been in tranquil Devon the whole time.
I heard about the shooting of Mark Duggan over a week ago and thought ‘Oh, that’s terrible. His poor family. I hope the IPCC get to the bottom of it. More police corruption etc blah, blah.’ But I was busy seeing family so I didn’t give it much more thought. Then the riots started in Tottenham, and even at this point, I thought, ‘It probably won’t last long.’ It wasn’t until cars and buildings were on fire in Brixton, Hackney and Croydon that I, along with the majority of the population began talking, tweeting, facebooking or broadcasting about it non-stop.
It didn’t seem to make any sense. What did the death of Mark Duggan have to do with teenagers looting in disparate parts of London?
Someone posted the now  prolific, ‘Brave Hackney Lady' video on facebook: “You make me ashamed to be a Hackney person because we ain’t all getting together and fighting for a cause, we’re going down Footlocker and thieving shoes,” and I jumped to agree. As the images of burning homes and smashed up small businesses saturated the media, I was swept along with the consensus that this was ‘no longer about a shooting in Tottenham. This was hooliganism and opportunist criminality.’
I’ve always approved of political dissent, but this wasn’t looking like anything more than grabbing ‘free stuff’. The rioters appeared to be choosing targets out of greed, not for their political poignancy.
I couldn’t comprehend why the unrest had spread so quickly. I didn’t understand how these people had suddenly lost all inhibition and fear of the law. I was concerned the government intended to use the riots as an excuse to clamp down harder on civil liberties, Internet freedom and rights to protest.
But I was still completely ignoring the fatal shooting of a 29-year-old black man by police, and later, the beating of a 16-year-old girl by 15 police officers, when she was asking for answers about the incident.
I then watched a BBC interview with West Indian writer, Darcus Howe. The presenter was in the studio, Howe was standing in front of a burnt out building in London. The presenter asked "Are you shocked by what happened last night.”
He replied “No, not at all. I have been living in London for fifty years. There are so many different moods and moments but what I was certain about, listening to my grandson and my son is that something very, very serious was going to take place in this country. Our political leaders had no idea. The police had no idea. But if you looked at young blacks and young whites with a discerning eye and a careful hearing, they have been telling us and we were not listening, what is happening to them in this country..” he’s just about to go on and tell us what has been happening to them when the BBC presenter interrupts him; "You say you’re not shocked by last nights events, does that mean you condone them?"
This type of either/or thinking seems so typical a trait of the BBC since the beginning of the ‘War on Terror,’ echoing George W Bush’s: 'You’re either with the terrorists or with us!'
When the interview isn’t going quite the way she'd hoped, the presenter accuses Howe of participating in riots in the 1980s:
“Your not a stranger to riots yourself, I understand, are you?” she asks as though addressing a naughty schoolboy. He counters, “I have never taken part in single a riot in my life. I’ve been on demonstrations that have ended up in conflict, and have some respect..” Howe is understandably incensed.
No one with an ounce of empathy would condone the violence, the damage to people’s homes, or the three tragic fatalities that have occurred in Birmingham but perhaps we should cease the continuous ritual of condemnation, and acknowledge that these occurrences are ugly by-products of political unrest. Ugly by-products, the mainstream media has chosen to focus on for political reasons.
"If you’re not careful, the newspapers will have you hating the people who are being oppressed, and loving the people who are doing the oppressing." – Malcolm X
In one NBC report, a young man in Tottenham was asked if rioting really achieved anything:

"Yes," said the young man. "You wouldn't be talking to me now if we didn't riot would you? Two months ago we marched to Scotland Yard, more than 2,000 of us, all blacks, and it was peaceful and calm and you know what? Not a word in the press. Last night, a bit of rioting and looting and look around you."

Around him were several young men being interviewed by news teams.


As a result of the riots, I am also aware that 333 people have died in police custody since 1998 and their have been 0 police convictions; a total of 400 people from black and ethnic minorities have died in police custody since 1990. I wasn’t aware last Thursday. My previous article on this blog is about the wrongful conviction of a man. A white, businessman. I spent weeks researching it. I have to ask myself, why wasn’t I aware?
"The people do not know, because they are not told." Hilaire Belloc, poet.
I am sorry for everyone who has been hurt. I admire the Londoners who took to the streets with their brooms to clear up. I salute the fire service. I praise the people who had a whip round and bought a present for Ashraf Haziq, the Malaysian student who was robbed. I appreciate the police for getting to grips with the situation and working through the night to keep the streets safe. I think the people who brought them tea are lovely.

I do not salute the reaction by some of our population who are brimming over with vitriol and welcoming a police state.
Noone can deny there has been a serious problem, but let’s not be too quick to put it down to greed and bad parenting. Let's not make this into an 'us'and 'them' moment in our nation. As in 'Us', the law abiding folk and 'Them,' the rioters.
It should be 'Us', the people, and 'Them', the bankers, politicians and corrupt sections of the police.
How many livelihoods and homes people have the bankers ruined and broken? How often have politicians and police abused their power?
If Britain is ‘sick’, we should ask why. If Britain is ‘sick’, one could say David Cameron is the nurse contaminating the patient’s saline solution with insulin. If this was just ‘mindless thuggery’ we must ask how, when and by whom were the lobotomies performed?


I went to school with some of the people throwing insults about ‘scabby chavs’ on facebook. Come on guys, most of us had at least one parent who gave a shit about us; we went to an exceptionally good school, surrounded by open space, where the teachers were compassionate and dedicated; we lived in a kindly community with nothing like the level of violence and fear the kids of Peckham or Streatham live with, and didn’t you shoplift an eyeliner from Boots once? Or a chocolate bar from Woolworths, ever? You just never know what you’d be capable of given different circumstances.
"Nothing should be off the table." David Cameron
An authoritarian knee jerk reaction is what I feared; that there would be sufficient material in the media to disgust the nation in such a way that the majority would allow unlimited police power to protect themselves from the 'rioting' minority. Much like after the bombings of 2005 when Tony Blair announced "the rules of the game" had changed, Cameron is proposing a series of similarly draconian and impractical measures including shutting down the Internet in times of civil disorder!
What is the definition of 'civil disorder'? Could it be extended to talking in a bad way about the government? That is the sort of thing that has been attempted by Middle Eastern Autocracies in the face of revolts from their own oppressed people. Let’s not forget this minority were complaining about oppression in the first place.
First they came for the Duggans,
and I didn't speak out because I wasn't  a Duggan.
Then they came for...

The Hackney Lady was right. Let's get real.

'Anyone who sacrifices their freedom for security deserves neither.' Benjamin Franklin.

Give Our Kids a Future! A North London Unity Demonstration


London is Burning: Youth Demand a Future Protest and Meeting