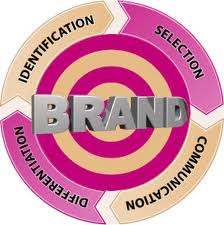 The concept that mainstream music artists are like brands is nothing new but these days I'm seeing a closer resemblance to supermarkets: they seem to be parred down to a handful and they're difficult to totally avoid. They are everywhere, whether we like it or not, invading our psyches via TV or Radio (unlucky if Radio 1 is the populist choice in your workplace, or it’s company policy to play MTV on the big screens during your bar job shifts). Sound bites and gossip about celebrities and pop stars constantly dilute the news and swamp the Internet. Pictures of half-naked socialites and details of film-star diets accompany headlines about rioting and war.
‘You can’t stop talking about me, tweeting about me' goads X Factor contestant turned chart topper, Cher Lloyd in her debut single ‘Swagger Jagger’. Well, in response I'd say, that’s because you're bloody everywhere, like Tesco Express. I didn’t pick her, I didn’t buy her single, I didn't google her but I still heard about her. So curiosity got the better of me and I did listen to her song and it was as bad as everyone said it was. I’m not what she might call a 'hater'; hate's a strong word and takes way too much effort but her song is as wrong as a tub of Tesco's pre-made sandwich filler. 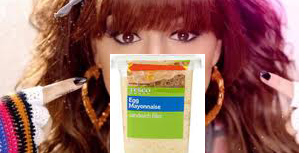 I consciously try to avoid 'the big four' and always Tesco since they plonked an EXTRA in the middle of our small seaside town. Instead, I aim to support small, local, independent shops when I can. The food is usually better and fresher. It's a pleasanter experience and great to see an employee being treated like a human being and not a corporate slave at the bottom of a capitalist pyramid. But now and again I just end up in a supermarket because I need a bottle of water, or it's Sunday, or 8 o clock at night, or I've only got £3.50 left until Wednesday. They are getting more and more difficult to avoid in modern life. They have driven out the competition and dominated the market with lower prices, big advertising campaigns and sheer prolificacy. Many people have become reliant on them for the majority of their weekly shopping.
These days you can neither go to a large music festival without the headlining presence of one of the major music ‘brands’: Beyonce, J-Zay, Rihanna, Jessie J, Black Eyed Peas etc.
In some people's eyes the number of fans these artists have should reflect their talent. But really, it reflects their coverage, the influence of their sponsors and the clout of their advertising campaigns. They are just like the supermarkets that have the biggest presence. Not necessarily the best but people get used to going there.

Have their fans really had a good look around? They might find there’s the musical equivalent of a local delicatessen or real patisserie down the road, run by some not so famous people who make a damn good musical croissant and will even give you the time of day and have a chat about what’s really going in the world instead of going on and on about their own sex lives, wealth and fame.

Rihanna is not a great vocalist live; she sings along to a backing track, karaoke style, rarely finishing a lyric but giving it a lot of sassy attitude. It doesn’t seem to deter her fans. What she lacks in vocal talent she makes up for in plenty of costume changes, elaborate staging and headline-grabbing displays of apparent sexual willingness towards the audience. Unfortunately, one of her songs was drilled into my head. I'm afraid I caught myself humming S & M whilst doing the washing up. So the songs are catchy? Perhaps, but so are commercial jingles if you hear them enough times. I could just as well have been humming: 'Washing machines live longer with Calgon!'

So here are some more specific pop star-shop analogies:
Beyonce and J-Zay are Asda because Asda pretend to be a wholesome outfit with family values, providing low cost food to the hardworking men and women out there but actually they're owned by evil Walmart and are rapidly destroying the world and your health. Beyonce with her bum shaking and bling flaunting reminds me of the infamous pocket-tap Asda advert. Ching ching! Listen to that change jangle! 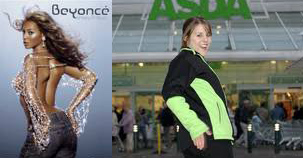 Lady Gaga is Morrisons, because the logo is lurid yellow like her hair and both have a penchant for pyramids. She could make a wonderful new dress out of scallops from their fresh fish deli. But be careful, she is secretly teaming up with Beyonce at Asda and poisoning you ala Telephone! 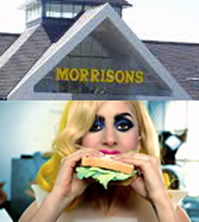 Rihanna is Tesco because the good girl gone bad is the most openly amoral. Tesco had no qualms about saying no to a certain TV chef's free range chicken campaign. And Rihanna had no qulams about her S & M video being banned in several countries: "Controversy means more publicity and more success", she chirped in an interview after the Brit awards. Controversy is good for Rihanna business. Cheap chicken is good for Tesco business. Rihanna and Tesco appeal to the lowest common denominator in people; for Tesco customers it's cheap, battery-farmed chicken breasts and thighs. For Rihanna fans, it's just breasts and thighs. With her new single 'Cheers' she advises alcohol as a way of shaking off one's problems; "Turn it around with another round," she sings. Drinks manufacturers and supermarkets can only be too pleased about this endorsement. And since many in the US are living in tent cities due to the global recession, they have lots of problems to escape. 2 for 1 on strong lager anyone? The only way Tesco could be more like Rihanna was if the cashiers spoke over a pre-programmed backing script and never finished a sentence themselves. 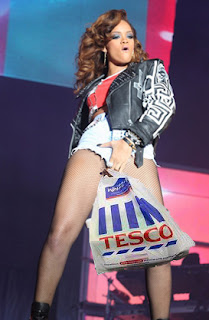 The Black Eyed Peas are Spar because they're just, well, a bit shit and full of dodgy raw ingredients that's been over-processed and disguised by some sort of nasty cheese sauce. 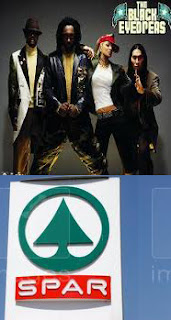 Ndubz is Iceland because I've never been there and probably never will.
Britney Spears is Woolworths, once full of cheeky pick-n-mix, fluffy hairbobbles and school uniforms, but now sadly dysfunctional.
Coldplay are Waitrose because they're all posh and piously sanctimonious with their Make Poverty History bracelets and responsibly sourced crayfish tails.
That leaves Sainsbury's and I'll have to give that to Jessie J because of the J and because she's British.  And even though Price Tag was an annoying song that grated on me for a whole working summer, it's much better to hear kids sing, 'It's not about the money,' than 'Sex in the air, I love the smell of it,' (Rihanna) so that's like sainsbury's commitment to Fairtrade bananas in my mind!
So remember to SHOP AROUND! Keep supporting the small shops. Keep listening to, tweeting about, talking about and sharing good music otherwise we face a dystopian future of only Tesco and Asda and only Rihanna, Beyonce or Gaga!! Arghh!!

Starsuckers.  A very interesting and well researched docu on the cult of celebrity.

Jarvis Cocker- Running the World.  Jarvis' heartfelt bid for alternative xmas No.1 Excuse the language, but come on, that's what swearing is for.

http://www.vigilantcitizen.com/  For those who aren't familiar with this site and the themes within, it's a real eye opener..